One cannot still ignore Recep Tayyip Erdogan’s dangerousness. Every single speech he pronounces unveils his toxicity.
On the 5th of June, during the inauguration of the new headquarters of Turkey’s Women’s and Democracy Association, Erdogan declared that childless women are “incomplete and deficient”.
The current fertility rate in Turkey is 2,06 per woman (it reached 6,3 in 1960 and is now of 1,92 in Iran). A 2,01 fertility rate is required to maintain and renew a population.
This strong interest for Turkey’s fertility rate is undoubtedly linked to the “Kurdish demographic bomb” (a phrasing used in Ankara’s secret reports), as the fertility rate is strongly unequal between the West and the East of the country.
Whereas the fertility rate in the western part of the country is below 2,01, it exceeds 3 in the eastern regions. 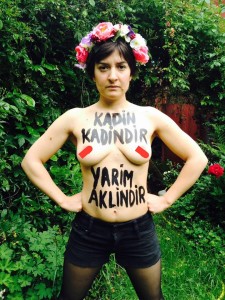 According to Erdogan, childless women are not good Muslims, as he fears the spread of atheism and wishes to create a religious state.
Women’s body is not a war weapon Erdogan. It can give life, but it is not an obligation, nor an end in itself, it should nevertheless not serve to support deadly policies.

Women are not a complement, Turkish women deserve more than your primary considerations. They evolved, got educated and take part in Turkey’s wealth, they are your opposite as you only bring destruction and obscurantism.