Denis Sinyakov is one of the most renowned Russian photographers. He was a photo editor and staff photographer for Reuters and AFP for 10 years, and has become a freelance photographer in 2012. He works mostly on his own photo and documentary cinema projects. One may find his works in Der Spiegel, Helsingin Sanomat, Meduza, CNN, Al Jazeera etc. In 2013 he was arrested among the crew of the Greenpeace boat “Arctic Sunrise” for attempting to hold a protest action on the one of the gas production platforms in the Pechora Sea.

Denis is the author of this photo; he chose the picture among the ten most favorite ones of his career. This is how he described his experience of meeting FEMEN activists and the story behind making the photo in his own words:

“March 3, 2012. Moscow. Oksana, Anna and Irina – Ukrainian activists of FEMEN Movement are preparing to the action at the polling place.

It was obvious, that voting results are going to be rigged, thus FEMEN decided to make a performance: stealing a ballot box and passing it to Putin.

A backstage is always more interesting than performance itself. I remember there were talks that some politicians or oligarchs are behind the FEMEN. But it turned out that they buy food at the ordinary kiosk, rent a room at the cheapest hostel, where men in the lobby switch the TV channels one after another and back again. They have no lawyer, no group of support to give a hand.

For this action at the polling place, right after Putin had put his own ballot; girls were sentenced to 5-12 days under arrest.” FEMEN Spain from the Inside

Face to Face With Inna Shevchenko by ELLE 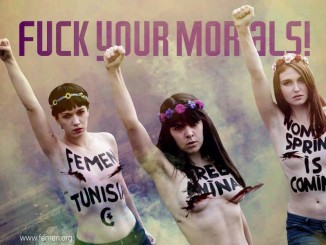 The Answer to AntiFEMEN Protest in Marocco – Fuck Your Morals