Despite having reduced their protests in recent months, FEMEN is still active and preparing new actions in Spain. This is how this organization works.

We’re at X. From there we accompany her to the seat. The speaker is Lara Alcázar, leader and founder of Femen Spain. In spite of asking a particular direction, she politely refuses. “It is very nearby. I prefer accompany”. Everything about FEMEN has an aura of mystery. The threats they receive almost daily in their Twitter account and the telephone number they provide in their Facebook page make them move with a thousand eyes. They are discrete. No one would see the place where they train and organize, that’s where the protests that have brought color to many political, economic or religious leaders are forged. Although their actions always get a lot of media and social networks impact to carry out only necessary resources. According to internal estimates, the organization has only about 300 activists worldwide. In Spain it does not exceed the ten. They are the ones that form the heart and brain of FEMEN in Spain. Starring the actions and participate in decision-making. Sometimes, depending on the external responsibilities of each, the core reduces even more.

Alongside them there are many others that come and go. Girls are generally very young, in their twenties, who are attracted to the movement, but rarely consolidate their involvement beyond attendance of some training. They are hard and few of them support it. Even Indira, who co-founded with Lara the Spanish branch and shortly after the first contact with the methods of FEMEN stepped aside.

Everything is based on sextremism, ie the use of the naked body as a political weapon. Not enough to go topless on the street with messages painted on the body. They must fight, resisting arrest, strain the message. Two activists make security forces while one pretends that stands in front of a target. The action is real, but the violence of their partners themselves. Occasionally they have finished injured. Finish and repeat, – Lara corrects. The instructions – “Don’t stop, legs apart, aggressive, but never violent. Don’t laugh. The goal is to stay as long as possible shouting the message, hold on to whatever. You must show them being violent, not us. And always try to bully the object of the action, don’t let feel safe.” And they don’t feel. Since May 2013 when the Spanish branch was founded, many people have had to bear the disruptions of activists. Esperanza Aguirre, Alberto Ruiz-Gallardon and Antonio Maria Rouco Varela among others. Interior Minister Jorge Fernandez Diaz was even boarded twice in one day. “It’s becoming increasingly difficult; security is greater and suspicious to a single woman. We are expected”, – explains a point of pride Begoña, an activist who starred in that protest, a veteran as Lara is. Together they carry much of the burden of the organization. They are, Silver says, those who rule.

Are there bosses in FEMEN? Neither Lara, nor Begoña hide – there is a rigid hierarchy in the organization. “It’s not like a military hierarchy, based on blind obedience. It is through experience and involvement. Not all devote to this 95% of the time like Lara, come here sometime. You may not have the same level” – says Mireia, one of the oldest and closest to the direction circle. It was she who starred in last naked FEMEN protest in the Senate during the adoption of the reform of abortion. When she was released and the media started asking her statements, it was Lara who spoke with editors. “And it’s for good. I would not have been able to do as good”, – says Mireia.

It’s not everything that depends on Lara. She’s in contact with the other leaders of FEMEN International. Hence the hierarchical structure is repeated. Nothing is done without the knowledge of Inna Shevchenko, the founder of the movement settled in France after fleeing Ukraine in 2008. Each proposal is discussed first at the national headquarters. Proposals are accepted, but the last word has a core. “Those who have more experience and we know if something works or does not work”, explains Begoña. When the decision is made, it is subjected to the approval of the other speakers in each country. Not only are reported to accept or reject the proposals of each country.

Behind all this bureaucracy is, however, a very fragile structure. They are funded exclusively through donations and sales of their store (flower wreaths, t-shirts etc…). In weekend-camps they used to gather 18 or 20 girls ready for anything. Now in many workouts every Saturday, they fail to join more than 3 or 4. Some weekends are suspended because there is not even enough to embody the roles of the branch.

Not only fails uptake. Increasingly critical voices have emerged within FEMEN International. Amina, the Tunisian student, who became an example in March 2013 after being arrested in the African country for posing in nude. It was she who inspired Lara to start FEMEN Spain. However, that same year she left FEMEN amid accusations of Islamophobia. Still, Lara trivializes. She said the organization is not just Islamophobic, but combat any religion, any manifestation of “patriarchy”. They will continue their struggle. Coming soon. 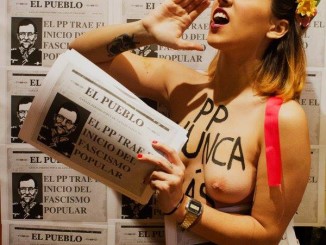 FEMEN Spain: Vote for the Democracy! 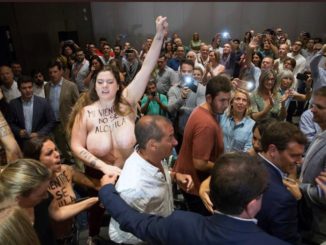 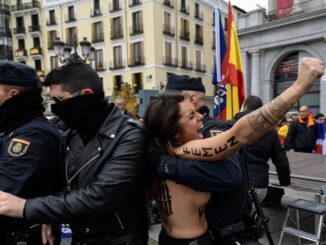