In 2015, Daleiden created a fake biomedical research company in order to sneak into Planned Parenthood, where he gathered footage used to attack the health organization. Although deemed fraudulent, Daleiden’s video led to both legal and lethal attacks on Planned Parenthood and its patients.

Seconds after Daleiden took the stage, FEMEN activist Anni Ma set off a personal security alarm from within the crowd, and took her shirt off to reveal “FREEDOM MEANS CHOICE” painted on her chest. Activist Carly Mitchell joined Ma in chanting “Fraud! Hypocrite! Liar!” at Daleiden.

FEMEN activist Chelsea Ducote donned volunteer vests that allowed them to “guard” the barricades near stage-left. The diversion created by Mitchell and Ma allowed them to rip off their tops and break through the barricades, sporting the slogans “ABORTION IS SACRED” and “FUCK YOUR MORALS” on their chests and chanting “Fraud, Fake, Liar!”

The stage was enormously guarded and over 6 feet high. Ducote climbed up the wheelchair lift and tossed 200 fake subpoenas at Daleiden, featuring his face stamped with “Fraud,” “Fake,” and

“Liar.” Ducote was seized by half a dozen pro-life men before they were able to climb onstage.

The activists’ chants were joined by other civilians and continued chanting throughout Daleiden’s speech and until Ducote and Ma were put in a police wagon. They were detained for a few hours.

Ma received a misdemeanor for the archaic park code 4.01h, despite the fact that it is legal for both men and women to be topless in San Francisco.

“I have written to Sf Board of Supervisers at length about changing this park code, but they have not risen to the occasion,” said Ducote.

The pro-life thugs that dragged Ma across the ground by her arm and held Marston in a headlock were not arrested. FEMEN U.S.A. is looking to identify these individuals.

According to Ducote, “FEMEN U.S.A. will challenge this. It is not only legal to counter-protest, it is our civic duty as Americans to stand up for human rights.” 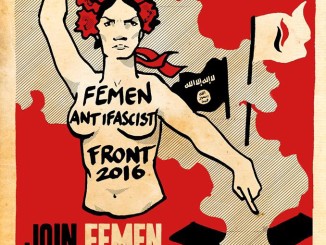 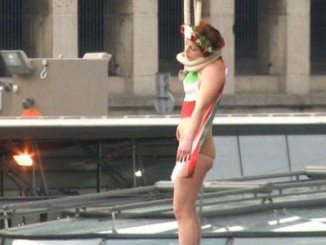