8 FEMEN activists have carried an action right in the center of Madrid to protest against the continuous murders of women that year after year are committed in the name of love. Thousands of women are assassinated by those who claimed to love them. By those who once gifted them with hearts, balloons, roses and chocolate on a February 14th.

According to official data from the Equity Ministry, 1,043 women have been killed in Spain by their couples or former couples since 2003. In 2020, this number already rises up to 10 women so far. Those who today will bring flowers to their couples under the idea of romantic love, belonging and control, can be the ones taking them to their graves.

With slogans as “Yesterday it was love, today it’s femicide”, or “today we’re alive, tomorrow six feet under” we want to condemn the consequences that romantic and patriarchal love have over women. It is literally taking our lives away.

Sentimental relationships have to be built on top of a caring and safe environment. They can’t keep on being part of that romantic love idea of “you’re mine, and no one else’s”. That’s why we require a sexual and affective education in schools that teaches how to respect and love from a feminist perspective. We demand the end of sexist crimes and the end of the lack of politic dimension of the femicides.

The far right denies gender-based violence while at the same time tries to impose in the schools the Parental PIN. With these categories, it’s pursuing the relegation of gender-based violence to merely domestic violence. The far right seeks to hide again the murders at home, it wants us to believe again that those are “passion crimes”, making us listen again to that old “the poor man went so crazy in love he killed her”.

Romantic love has to die. All those who kill, did also bought presents. We do not want flowers to cover our grave. 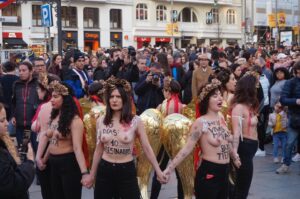