The women arrived to the P.S. 59 polling site just after 8:15 a.m. and ripped off their shirts to reveal a message for the business magnate.

“Trump, grab your balls” was written in black paint across one of the protester’s bare chest and stomach. The other woman had “Hate out of my polls” written around her exposed breasts. 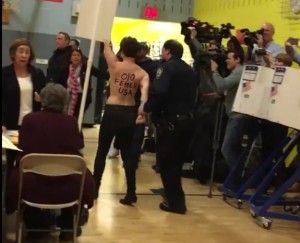 The disrobed demonstrators, identified by police as Tiffany Robson, 28, and Neda Topaloski, 30, weaved around the lines of voters in the school’s gymnasium, shouting “Grab your balls! Out of our polls!”

The protest appears to be in response to the lewd hot-mic recording from 2005 of Donald Trump bragging that stardom entitles him to “grab” women by their genitals without their consent.

Trump had not yet arrived to vote at the time of the eye-grabbing stunt.

Robson, of Seattle, and Topaloski, of Montreal, managed to march around nearly naked for roughly 30 seconds before the Secret Service and police officers escorted them out of the school and arrested them. The protesting pair were taken to the 17th Precinct and issued summonses for electioneering, a violation for promoting a candidate at the polls, police sources said.

Robson said she’s been watching incredulously as Donald Trump gets closer to the White House.

“I can’t imagine living in a country that would elect him,” she said. “It’s almost surreal that he’s gotten this far.”

Trump arrived hours after the protest to cast his ballot at P.S. 59 within 40 miles of where Hillary Clinton voted just after 8 a.m. near her home in Chappaqua , N.Y. 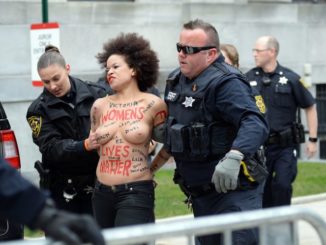