Breakout attempt at Saran prison in France! On January 22 at noon, a group of bare breasted FEMEN activists tried to dig a tunnel to the prison to free Ms Sauvage who is unjustly sentenced to 10 years in prison for killing her husband (and his torturers).

For 47 years Jacqueline and her four children have been violently abused by this monster.

How is it that self-defense is claimed as a policeman kills a criminal in the confrontation, but not when a woman is tortured for 47 years, when her children are raped by him, and after futile to have turned several times to the police, do not find any other ways to end abuse and violence than to kill a man who torments them?

Is it fair to judge Jacqueline Sauvage to 10 years in prison while those who kill women for reasons like than their own jealousy and honor obsession can get less prison time?

When the system keeps silence, then women answer. If the legal system fails to protect women, women will stand for justice. Let’s unite in support of this woman!!!

FEMEN condemns this heinous injustice, requesting a presidential pardon and demands the immediate release of Ms Sauvage. Women subjected to violence should be protected – not locked up.

FEMEN insist on self-defense to be recognized in the legal system, including for women, and that legislation to be actually applied.

“Not for Sale” at Super Bowl 50 in San Francisco 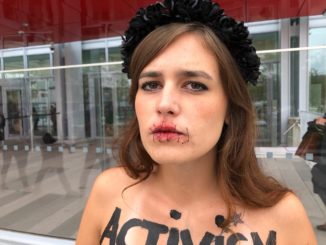 FEMEN Activists “Welcomed” the Cortège of Donald Trump Twice on His Way to Arc de Triumph.