A protest action “STOP PUTIN’S WAR” was held in Tbilisi (Georgia) against the military invasion of Russia into the territory of Ukraine.

The girls insisted close the sky over Ukraine, to be more decisive in terms of sanctions and the supply of weapons to Ukraine to protect not only Ukraine, but the whole world.

“Now Ukraine is a shield for the EU countries, which cowardly remain on the sidelines and simply keep statistics of bombs and missile attacks on kindergartens, maternity hospitals, and schools. NATO should be ashamed that small children to act as a shield to save their lives. We demand to close the sky over Ukraine. Below, on earth, Ukraine will cope fast! Ukrainians are an insanely strong nation,” — says FEMEN member Lada Titova.

The action took place on March 12 — the day of the worker of the penitentiary system of Russia and the World Day of Cyber ​​Censorship. With this gesture, the girls conveyed their “hello” to Putin and the Putin regime, which regularly arrests, beats and makes it impossible for any manifestation of freedom of speech. This is the first and not the last joint performance of Ukrainian FEMEN and Russian Pussy Riot. Follow the news!

We are against war. Against violence. We are for peace and freedom. 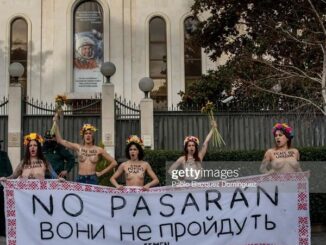