In 2013, Tunisian feminist Amina Sboui left the country after publishing a topless photograph that caused a scandal across the Arab world. After two years in France, Amina is back in Tunis – with a new plan to stir things up.

On 8 March 2013, from her grandparents’ house in the Tunisian capital, an 18-year-old activist called Amina Sboui uploaded a photograph to Facebook, took a deep breath, and hit “post”.

The photo showed Amina reclining on a leather sofa, reading a book and smoking a cigarette. She wore red lipstick and black eyeliner. She was naked from the waist up, and across her torso was a message written in Arabic: My body belongs to me; it is not the source of anyone’s honour.

As she watched the comments stack up beneath the picture – almost a thousand in the first hour – Amina began to panic. She had anticipated the abuse, the misogyny, even the death threats. What she hadn’t considered was something that now looked inevitable: her mother was going to find out. She closed the laptop and left the house.

Six days later, Amina’s mother found her hiding at the home of a friend in the centre of Tunis. She bundled her daughter into the car and drove south to Kairouan, where she had a sister and where Amina spent the next three weeks locked inside the family home.

Unable to imagine any rational explanation for the girl’s behaviour, Amina’s mother concluded that she must have been possessed by an evil spirit. Kairouan is among the oldest and most revered centres of Islam in North Africa, and it was not difficult to find among its clerics a man who claimed expertise in the casting out of demons.

He came to the house day after day, says Amina, placing his hands on her head, reciting passages from the Koran, and asking if she had vomited green bile. When the exorcist’s mobile phone rang as he was about to begin his ceremony, he took it as proof that there was a devil in the room. “When your phone rings,” Amina told him, “that’s proof that someone called you.”

By early April, hoping that Amina had been cured of her madness and that the danger to her life had now passed, the family let her return to Tunis. But if they thought the worst was over, they were quickly proved wrong.

A month later Amina was back in Kairouan – not to visit her aunt, but to protest at a planned meeting of Ansar al-Sharia, a radical Islamist group that emerged during the Tunisian revolution in 2011. On the wall of a cemetery not far from Kairouan’s great mosque, Amina scrawled the word Femen – the name of the European feminist collective, now based in Paris, whose topless protests had inspired her own act of defiance. Immediately, she was arrested and charged – first for carrying a pepper spray, later for indecency and for desecrating a cemetery.

Amina’s trial exposed a fault line that has split Tunisian society for decades. The country is among the most progressive places in the Arab world, and there were plenty of Tunisians – feminists, secularists, human rights activists – willing to defend her right to protest even if they didn’t approve of her methods.

Other liberal voices, including those of some well-known feminists, condemned Amina, arguing that her actions had set back women’s rights by turning what ought to be a social and political struggle into a divisive, unwinnable war over faith and culture.

In May, an already volatile situation was exacerbated when three European Femen activists stripped off in protest outside the Ministry of Justice in Tunis. They, too, were arrested and jailed. Maya Jribi, a Tunisian politician and long-time advocate for women’s rights, deplored the use of Femen-style tactics in the context of a country like Tunisia. “Please leave us alone” she said. “You risk ruining everything we have fought for.”

The European women were freed within a month and returned to Paris. At the beginning of August, just over two months after she’d been convicted of possessing pepper spray and imprisoned, Amina was also released. Still facing death threats and keen to finish her education, she, too, left for France. Many in Tunisia were glad to see her go.

In France she completed high school, covered her body in tattoos, and co-authored an autobiography that was published in Paris under the title, My body belongs to me.

In the title and in the book itself, Amina stressed the point that she had been trying to get across in the original photograph – that when the female body is seen as the repository of a family’s honour or the source of its shame, it immediately becomes a possession that must be owned and guarded by men.

The male demand for female modesty, she argued, is implicitly backed by the threat of violence. So-called “honour killings”, still endemic across North Africa and the Middle East, are just the most extreme manifestation of this threat.

“They talk about people who die because of alcohol, because of cigarettes, because of drugs,” Amina says. “But also because of honour. We have no statistics, but I am sure it is huge.”

For much of her time in Paris, Amina stayed in the family home of a French writer and publisher called Michel Sitbon, and it is with his financial backing that Amina has been able to start work on her new venture.

The magazine will be called Farida – a girl’s name which means “unique” in Arabic but which also carries, to Amina’s ear, an echo of the English word “freedom”. It will be printed in Arabic only and aimed at women between 15 and 25 years old.

Farida draws it inspiration from an earlier publication called Faiza, which was first published in Tunis in 1958 by a pioneering female journalist and editor called Dorra Bouzid. Bouzid, now over 80, is still active in Tunis, and was planning to collaborate with Amina until the two women quarrelled and fell out.

Whatever their disagreements, Amina acknowledges her debt to the older feminist and sees a parallel between the needs of Tunisian women today and the struggles of an earlier generation.

When Bouzid published Faiza, Tunisia was a newly independent country, and its first president, Habib Bourguiba, had just passed a series of laws that gave unprecedented new rights to Tunisian women. Polygamy had been outlawed.

Divorce had been legalised. Marriage could no longer take place without a woman’s consent. There was an urgent need, Amina argues, for the secular ideas of Tunisia’s rulers to be reflected in the popular press and translated into the culture of everyday life.

Faiza – the first women’s magazine published in Arabic – was part of that movement. And Farida, Amina hopes, will advance the same progressive, secular values for a generation of young women who have grown up in the increasingly religious and conservative climate of 21st Century Tunisia. 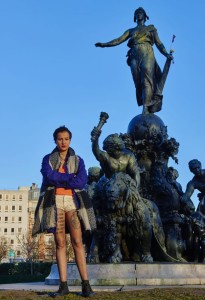 Hostility towards fundamentalist forms of Islam is the thread that joins Amina’s topless protests to her work as a writer and editor. She does not regret the incendiary provocation of the topless photos, but she does want to turn her attention to “something that everyone will be able to understand”. Farida, she says, “will be more mature than provocative. It’s not, like, the ‘activist Amina’ – it’s the ‘editor Amina’. It’s another personality.”

The blaze of controversy that Amina sparked in 2013 has not yet been extinguished. In the streets of Tunis and even in the picturesque village of Sidi Bou Said, where she now lives, Amina’s appearance in the street still draws insults, abuse, and stares of outright disbelief. Tunisia may be among the more liberal nations of North Africa, but it remains a traditional and predominantly Islamic country – a place in which Amina’s blue hair, facial piercings and elaborate tattoos retain the power to shock.

The death threats, too, have not entirely subsided. But if Amina is frightened, she gives no sign of it. It’s the haters, she says, who are truly scared. “I see people afraid of women,” she says. “They are trying to do anything [so] that we don’t open our mouths, because they feel the danger of women.” 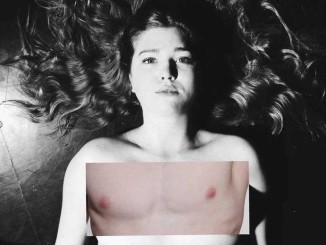 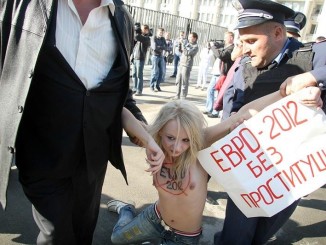 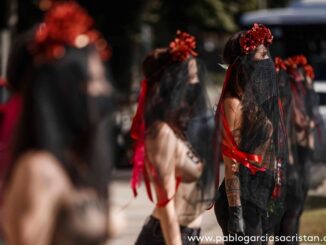