Poland’s parliament uses the health emergency to attack woman’s rights!
Already in 2018, the ruling right-wing conservative party PiS with the support of the Catholic Church tried to tighten the abortion law. This caused great resistance among the Poles, their symbol was black clothes and an umbrella. Mass protests followed which forced the government to refrain from enforcing the tightening. Today, the government is debating the same law change again, attempting to prohibit abortion in all cases! During the corona pandemic, in which our personal rights are already drastically restricted, protests almost impossible, the government actually dares to talk about this again. This approach is insidious and deeply malicious.
Who protects the right of women over their own bodies? In this state, the church and government consider the right of unborn life to be more important than the right of women to make decisions about their own bodies.
But the Poles demonstrate anyway! They hold posters while standing in the supermarket queue, write protest messages on their respiratory masks or block out loud crossings in the car parade.
FEMEN shows solidarity with the struggles of the Polish women!
We demand that this or similar disgraceful debates about tightening the abortion rights come to an end. We demand easy access to abortions. Now!

MY BODY MY CHOICE
POLAND FIGHT THE VIRUS NOT WOMEN! 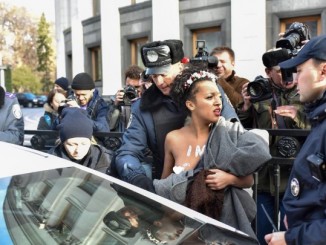 “Stop Homophobia!” protest in Kyiv. FEMEN Activists are Under Arrest 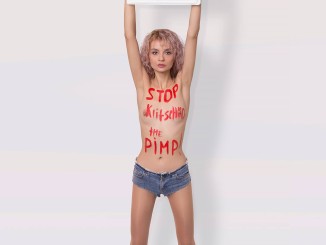 Pimp Must Be Punished!