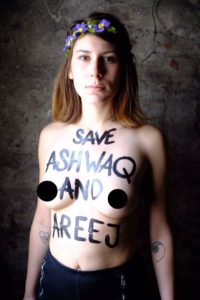 Ashwaq and Areej are two young Saudi sisters who sought asylum in Turkey in February 2017 from domestic abuse and the stranglehold of Saudi Arabian society on their dignity as women.

Yesterday, they were arrested by the Turkish police due to a slanderous formal complaint issued by their abusive parents. The Turkish immigration office is preparing to deport both sisters back to Saudi Arabia, back to their physically abusive parents, and back to a society that continues to malign and degrade them for being born a woman.

To make matters worse, if the sisters are returned to Saudi Arabia, they will be killed. Already there have been calls by family members and tribesmen to slaughter both sisters to protect the family honor. To make matters worse, earlier today, both girls were handed over to the immigration officers without the presence of their lawyer, and have not been seen of or heard from ever since. No one knows where they are!
Please sign and share this petition to raise awareness.
Also, please call and/or email the the Turkish Minister of Foreign Affairs, Mevlüt Çavuşoğlu. Call the numbers below and demand to speak to these individuals.

We need to act quickly!
https://www.change.org/p/save-ashwaq-areej-from-being-deported-to-saudi-arabia

Hijab Day: There’s No Such Thing As a Feminist Who Supports the Hijab